In mid July, the Sysselmannen has published his new proposal for a new management plan for the large nature reserves in eastern Svalbard. The radical earlier proposals which include closing most areas for public traffic seem to have vanished after strong critizism they have met almost everywhere. According to the Sysselmannen, the most significant changes from the present status quo are the closing of parts of Lågøya and Tusenøyane from May 15 to August 15.

Any comments on the current proposal can be forwarded to the Sysselmannen (where they will probably go straight to the bin unless you are part of the relevant higher beaurocracy in Oslo or you work for the Norwegian Polar Institute) until October 10.

Further details will be posted here as the process is going on.

Tusenøyane (Delitschøya, already completely off limits today, in the picture) are proposed to be closed from May 15 to August 15. 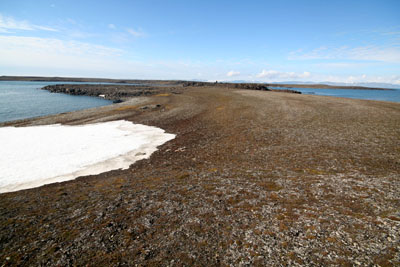