Polar bear shot while climbing through a window into a hut

On March 24, a polar bear was shot while it tried to enter a hut through the window. The hut was used by a couple from Longyearbyen, who tried to scare the bear away with noise and by throwing items at it. When this turned out to be unsuccessful, the bear was shot at short distance with a revolver.

The incidence happened in Hyttevika, an old trapper’s hut on the west coast north of Hornsund. The couple went there from Longyearbyen by snow mobile for the weekend. Both are considered locally very experienced outdoor persons.

The case is routinely investigated by the local police (Sysselmannen). Polar bears are completely protected in Spitsbergen and may only be shot in self defence. The authorities have already made known that the circumstances seem to indicate a case of legal self defence.

The case received some criticism during the following debate regarding the potential use of pepper spray, which is often used for example in North America to solve similar conflicts without loss of human or animal life. In Spitsbergen, however, the local authorities have officially declared that they do not support the use of pepper spray for self defence against polar bears. The owner of this website and current author means that pepperspray is certainly not suitable for stopping a bear that it vigorously attacking in open terrain, but may well be used successfully from the relative safety of a hut or even a tent to save the lives of bears and humans alike. A bear thus scared away is unlikely to go near a hut again.

This was the first case of a polar bear being shot since the lethal attack in Tempelfjord in August 2011.

The area of Hyttevika from a safe altitude, one day after the bear had been shot. 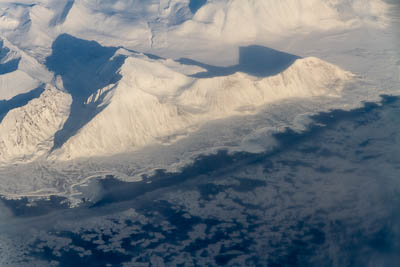