The arctic spring is just around the corner: signs of warmer days are more and more visible even in the high arctic. No darkness anymore since early April, and the midnight sun is officially shining in Longyearbyen since yesterday (April 20). The first birds, including Snow buntings and Little auks, have returned to their breeding areas.

The next days are even supposed to be quite warm, around zero degrees, but the forecast is promising temperatures well below freezing again later – let’s hope they are right. But a warm spell in mid April followed by colder temperatures until early or mid May is quite normal.

The ice conditions are also more “normal” again than last year. The east coast is packed with dense drift ice or even fast ice. The drift ice is also coming closer and closer to the north coast.

Ptarmigan on iceberg. Strictly speaking, the ptarmigan is no symbol for the spring, as it is the only bird to spend the winter in Spitsbergen. 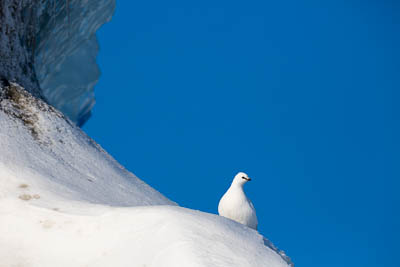