Home → * News and Stories → Arctic invadors: the Snow Crab in the Barents Sea

Arctic invadors: the Snow Crab in the Barents Sea

The introduction of new species to ecosystems, be it by natural migration, with human influence or helped by climate change, is hardly ever good news for any region affected. Too often, locally established species suffer severely from their new neighbours. This is especially the case for relatively isolated ecosystems, for example in polar areas or on remote islands.

There is a new species now established in the Barents Sea: the Snow Crab (Chionoecetes opilio), which can be up to 90 cm large (including the legs) and 2 kg heavy. She was wide-spread also in the past, with an occurrence in the Bering Strait and further north as well as at the coasts of Newfoundland. It is likely that it has migrated along the coast of Siberia westwards into the Barents Sea. Initially, it was found east of the Barents Sea, near Novaya Zemlya, but it has been reported east of Spitsbergen since.

Experience in a similar case, with King Crabs at the coast of North Norway, has shown that the marine bottom fauna is strongly depleted by their new hungry neighbours. It is likely that the Snow Crab has a similarly healthy appetite as its relative, the King Crab. Additionally, it may just be a question of time until the King Crab itself migrates further north to inhabit the northern Barents Sea and Svalbard waters.

The Snow Crab has been found east of Spitsbergen since the mid 1990s and is now about to become a precious target species for the fishing industry. 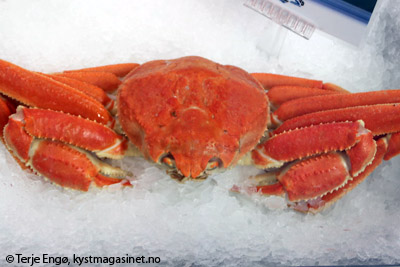