The remarkable and unique tusk of the narwhale serves as a sensible sensory organ which enables the animals to sense changes in their environment. Scientists were now able to confirm this assumption.

Narwhales are, together with white whales (belugas), part of the Monodontidae family. They live in the Arctic Ocean, especially west and east of Greenland, around Spitsbergen and north of the Siberian coast.

The main characteristic of the narwhale is it´s up to 2,60m long tusk. It usually grows from the males left canine tooth, breaking through the upper lip in a spiral rotation. In single cases a second tusk can grow from the right canine tooth. It is also possible that female individuals have one or two tusks but this is rather uncommon.

In history there were many differing theories trying to explain the function of the narwhale´s tusk. Today there are two common explanations: They serve as a distinguishing attribute for males, to maintain hierarchies and as a sensory organ.

Dr. Martin Nweeia from the Harvard School of Dental Medicine (HSDM) is part of an international group of scientists who study the function of the narwhale´s tusk. They were now able to confirm their assumption that the tusk serves as a sensible sensory organ. In previous studies there was pointed out that the narwhale´s tusk, differing from other mammal teeth, is not covered by an enamel which protects the tooth against external influences. Now the scientists could reveal that the outer layer of the tusk, the cementum, is porous and that the inner layers contain microscopic tubes leading to the center of the tooth. So the material of the tooth is rigid but permeable. In the inner core of the tusk, in the pulp, the scientists could find nerve endings connected to the whale´s brain. With this structure the tusk is sensible for changes in the external environment such as changes in temperature, salt level in the water or other chemical parameters. Experiments could show that the whale´s heart rate changed when the tusk was exposed to different salt levels in the water.

It is suggested that the ability of the tusk serves the male individuals to find food or to find females and to evaluate their willingness to mate.

The scientists are now interested in the question if the narwhales unique ability to use a tooth as a sensory organ is an evolutionary advancement or an ability which is left from a former stage of development.

Tusk and skull of a narwhale, stranded in Bellsund, Spitzbergen. 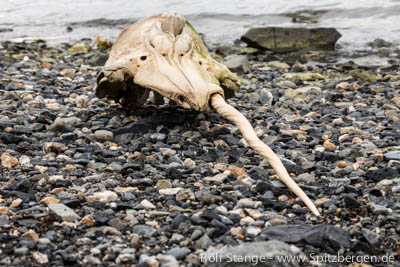