Initially, it seemed to be a very normal, natural course of things when locals from Longyearbyen found a dead polar bear in Petuniabukta, near Pyramiden, on 07 April. Soon, however, it turned out that the animal had been anaesthetised for scientific purposes just a few days before, on 04 April. The body was consequently brought to Longyearbyen for a postmortem.

In contrary to early local rumours, it has been stated that outer injuries, as might have been caused by another bear, are not present. Other polar bears pose a real threat to anaesthetised bears. The cause of death is at present unclear. Tissue samples have been taken for further investigations, but it may take weeks until results are available.

Anaesthetisation of polar bears can have secondary effects which may be lethal in extreme cases. Once scientific works are finished, the animals are not being surveyed any further. Other bears may do harm to defenceless polar bears. Also a change of position can inflict suffocation. This is what happened to a polar bear found dead on Edgeøya in September 2013, which had been anaesthetised shortly before (see Spitsbergen-Svalbard.com news: Polar bear dead after anaesthetisation by scientists)

Anaesthetisation of polar bears, which includes following them with a helicopter, is a traumatic experience for the animals with secondary effects that are obviously potentially very dangerous. Population data are, in Spitsbergen, not needed for administrative purposes: here as well as in the neighbouring Russian Arctic, polar bears are completely protected. There is no active management such as the fixing of an annual quota for hunting. Threats are more global, mainly climate change and long-lived environmental pollution, and cannot be managed regionally.

In late summer 2012, a polar bear family with two first year cubs were anaesthetised in Billefjord. The family showed significant behaviour changes at least for a while, pointing to the stress such an experience involves for the animals (see Chasing polar bears with helicopter in the name of science, October 2012). It is possible that the bear found dead now is one of the two little cubs of the family in Billefjord seen by many in Billefjord in 2012: it was a 1.5 year old female. 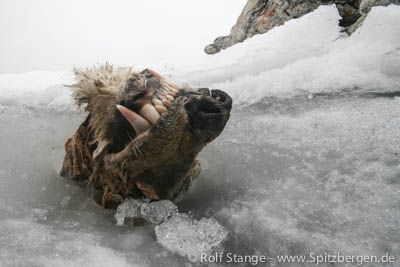