Home → * News and Stories → Austfonna: an ice cap on the move

Austfonna: an ice cap on the move

The ice cap Austfonna is covering large parts of Nordaustland, the second-largest island in the Spitsbergen archipelago. The total surface area of Austfonna, actually a composite of several smaller ice caps, is more than 8400 square kilometres.

For decades, Austfonna was considered to be relatively stable: it did not suffer massive loss of volume as many other glaciers in Spitsbergen and elsewhere in the Arctic. More recently, marginal parts were thinning while central parts were gaining thickness, a behaviour known to prepare a surge if it lasts for some time. A surge is a sudden advance where a glacier can move forward over many kilometres within a year or two, it is a result of glacier mechanics and not of climate variations (see Rocks and Ice for more about glaciers and surges). Also parts of Austfonna are known to have surged in the past, for example Bråsvellbreen, the southern part of the ice cap, in the 1930s.

Information from satellite images has now yielded evidence for increased velocity over large parts of Austfonna. The ice cap is pushing into the Barents Sea, producing vast amounts of icebergs and thus contributing significantly to global sea level rise, currently more than all other glaciers in Spitsbergen together. Nevertheless, scientists involved in observing Austfonna assume it will increase its volume in the years to come.

AECO, the arctic expedition cruise organization, has issued a warning to navigate carefully in these waters, as larger numbers of icebergs than usual and changes of the glaciated coastline have to be expected.

Such an event, where an ice cap of thousands of square kilometres starts to move more rapidly, is unique during the period of detailed scientific observation and regular touristic access. The recent observation is based on data from the European satellite Sentinel-1a. One reason these data have drawn more than just a little bit of attention is the fact that the satellite had, at the time in question, not even fully reached its orbit, but was nevertheless able to produce high quality data.

The ice cap Austfonna on Nordaustland has started to move more rapidly on large parts of its huge area. 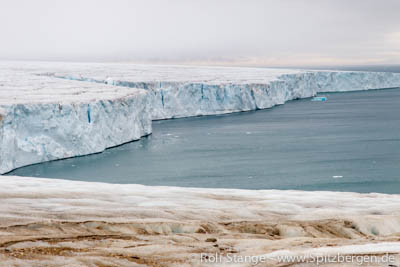