The Ocean Cleanup: solution for the global plastic pollution problem

Plastic pollution in the oceans is one of the truly threatening problems for the environment on a global scale, including the Arctic. You can see amazing amounts of plastics on many of Spitsbergen’s beaches, a lot from fisheries, but also everyday use plastic items including toothbrushes, lighters, bottles and so on and so forth. The list is endless. For an impression, have a look at the famous photos taken by photographer Chris Jordan on the remote Midway Islands in the Pacific: Albatross chicks who died with a stomach filled of plastic garbage, because it looked like food to their parents.

On almost every trip in Spitsbergen, we collect several cubic metres of plastic garbage from remote beaches, which has led to visible improvements in many places over the years (and by the way, nobody has the capacity to collect comparable amounts of plastics in such remote areas as tourist ships!). This is good, but obviously not the solution to a global problem.

Some impressions of plastic pollution on Spitsbergen’s beaches, from Bear Island in the south to Nordaustland in the far northeast, and of our efforts to clean some of these beaches.

Every day, plastic pollution is killing large numbers of fish, seabirds, mammals (from seals to dolphins and whales) and turtles in the world’s oceans. And probably even worse, once waves and UV radiation have grind the plastics down into microscopic particles, plankton is eating it, thus incorporating plastic in the food chain, where it is enriched on every trophic level upwards.

To really do something about plastic pollution, it would be necessary to:

The impression remains that The Ocean Project is likely able to make a significant contribution to the solution of an urgent global problem, at a price more than reasonable. To lift the project up to the next level, 2 million dollars are to be collected via crowdfunding. At the time of writing (18 June), more than half a million have already been donated. The present author and owner of this website has already made his contribution and asks the reader kindly to consider a donation. If you have seen the amounts of plastics on remote beaches in Spitsbergen or elsewhere or if you have seen Chris Jordan’s above-mentioned photos, they you are probably happy to support The Ocean Cleanup. Click here to get to The Ocean Cleanup crowdfunding website.

And remember a cotton bag for your next shopping trip … 🙂

Crew and passengers of SV Antigua collecting plastic garbage in Woodfjord, north Spitsbergen. This is done on almost every trip, also by other ships. 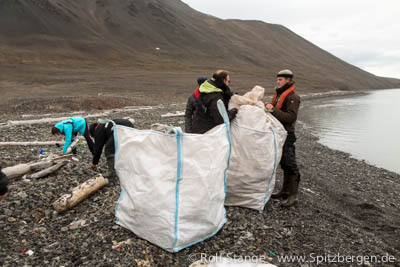