In July, a polar bear was seen on the north coast of Spitsbergen with a plastic fishing net around its neck. The bear was found again later, it could then be anesthetized and freed from the potentially deadly debris.

Not much later, another polar bear, again a female, was found entangled in a fishing net. In this case, the bar had a small transmitter in its ear, placed there by scientists to track migration movements. The net was entangled around the transmitter.

The bear was found in Sorgfjord by volunteers of the governor’s beach cleanup trip. Experts of the Norwegian Polar Institute (NPI) were flown in by helicopter to tranquilize the bear, but just before the NPI biologist fired, the transmitter fell off together with the net and the polar bear was free of the its burden. There were no signs of injury, and the bear seems to be fine.

Norwegian fishery is now facing criticism for the amount of dangerous fishing nets and other debris found in the north Atlantic and shorelines there. Fishing vessels are obliged to report loss of fishing gear at sea, and the fishery authority (Fiskeridirektorat) has, since 1980, the responsibility to retrieve lost nets and other dangerous debris if possible. Since 1980, more than 17,000 nets have been retrieved. The number of fishing nets found on beaches in Spitsbergen and elsewhere indicates, however, that the numbers of nets actual lost must be higher. Since 2008, damaged nets can be discharged in Norwegian ports free of charge.

This female polar bear had got a transmitter in her ear by scientists, which got entangled in a heavy fishing net. © Christian Nicolai Bjørke. 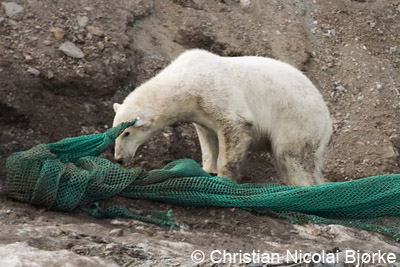