Several polar bears have been hanging out in the Billefjord area, north of Longyearbyen, for quite a while already. These have ben seen many times by tourists and the 14 persons who are working and living in the largely abandoned Russian settlement Pyramiden. Several times during the summer, a bear has been seen inside Pyramiden, also directly next to hotel Tulipan, where several people live and where guests are lodged.

Now, the polar bear has literally gone a step too far: during the night to Monday, it went through a window into the bar to have a look around. The human inhabitants of the hotel were woken up by the noise, but preferred to leave the polar bear alone to its business. No information has been published about damaged that is likely to have happened, other than that the living bear was not interested in his padded conspecific fellow. It is not known if the polar bear showed any interested in the strong drinks that are stored in the bar.

In any case, it had already left when the Sysselmannen arrived on the scene. Despite a 1.5 hour helicopter search, the bar bear could not be found.

As repeated attempts to scare the polar bear away from Pyramiden have not yielded anything beyond short-term success, the Sysselmannen has now decided to tranquilize the bear and move him to a remote destination when he comes back.

It is likely the same polar bear that bothered a student camp near Nordenskiöldbreen opposite Pyramiden a few weeks ago (when the great photo with the bear and the Svalbardbutikken plastic bag was taken).

Polar bear in the bar of Hotel Tulipan in Pyramiden (and yes, this photo is a photoshop affair, obviously). 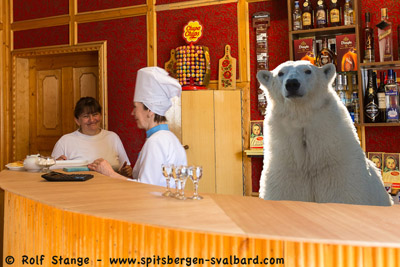