Polar bears were seen in the vicinity of Longyearbyen several times during the last couple of weeks, for example in Hiorthhamn, on the north side of Adventfjord about 3 km from town, in late August, and in nearby Adventdalen.

Last sunday (12 October) morning, a polar bear was seen just east of Isdammen, the lake east of Longyearbyen, near the road. But the “highlight” was certainly the bear that actually entered the lower part of Longyearbyen, near Adventdalen, today (Wednesday, 15 October) in the early morning. The polar bear came from Adventfjord and walked past Ingeniør Paulsen (a shop) and to the row of residential buildings east of Forskningsparken (the UNIS/Svalhardmuseum building), walking directly next to the houses in vei 238, partly between them. Then, it went back into Adventdalen, where it was found by the police near the first dogyard, only a few 100 metres from town. The Sysselmannen (police) scared the bear away and followed it for a while by helicopter to make sure it would not return straightaway. It went into Mälardalen, a valley on the opposite side of Adventdalen.

It was an unpleasant surprise for the inhabitants of the houses in vei 238 to see the polar bear tracks where some had been walking lately in the evening before. The thought of suddenly meeting a polar bear on the way home from school, work or the pub is quite unpleasant. At least, most people do not lock their doors, so in the worst case most houses offer shelter in case it is urgently needed.

The Sysselmannen asks everybody to be careful, especially as the dark season is now starting and a bear may be difficult or impossible to see before it is actually close.

This time, the polar bear was not only in Hiorthhamn, as in this photo from late August, but actually in Longyearbyen, close to Adventdalen. It may have been the same individual. 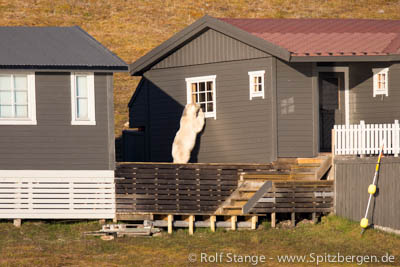