Today (Thursday, 19th March) early morning around 6 a.m., a polar bear was shot near Fredheim in Tempelfjord after an attack on a camp. A Czech group was camping, the tents were secured with a polar bear alarm fence of the usual system (Norwegian military system with nylon string). The polar bear, said to be a small, presumably young animal, probably crept under the alarm string into the camp without triggering any alarm.

The bear then dragged one man out of a tent, injuring him in his face and arm. Another man shot three times with a rifle at the bear, injuring him, but not killing him. The polar bear then dropped the man and ran away.

Soon, the Sysselmannen (police) was there, found the bear and shot him (or her).

The injured man was brought to hospital. It can be assumed that his injuries are only minor, as the group assumes he can be back with them on Sunday to continue the trip.

The camp is only a few hundred metres from the shore and ice edge. Polar bears are regularly seen in Tempelfjord in spring, most recently just a few days ago. Close to the camp that has been attacked, there are two more, larger camps.

This author happened to be in the same area just a few hours later, initially without knowing about the incident, and talked to the Czech group at their camp.

The camp which was attacked by a polar bear which was later shot near Fredheim in Tempelfjord. 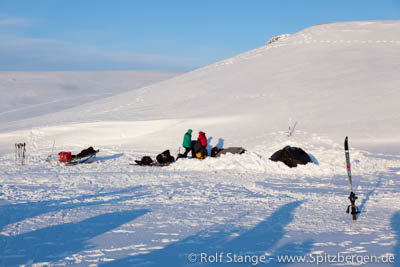