Russia protests against Norwegian oil development in the Barents Sea

Russia is using every opportunity to challenge the Norwegian government in the Arctic. Already in early March, the Russian ambassador has filed a sharp diplomatic note to the Norwegian ministry of foreign affairs to protest against the opening of blocks for oil and gas in the Barents Sea.

According to the Russians, the area in question should be governed by the Spitsbergen Treaty, which would give other countries more rights to make use of potential resources. The further development would, at least, not be a domestic Norwegian issue anymore.

The Russian reasoning, however, leaves a mixed impression at best: it is argued that Spitsbergen has a shelf area on its own, to which the relevant area belongs. Hence, the area should be treated as part of Spitsbergen, according to the Russian government, and not as part of the Norwegian economic zone.

It is commonly accepted, as is illustrated in the image in this article, that there is one continuous shelf from mainland Norway up to Spitsbergen, and this shelf belongs to Norway. This is certainly the perspective of the Norwegian government, which is certainly shared by the Russian government when it comes to their own shelf areas north of Russia. There is no geological or juridical reason to define a separate “Spitsbergen Shelf”.

The continental shelf in the Barents Sea (light blue) is commonly considered one continuous shelf. The arrow marks the position of Bear Island (Bjørnøya). 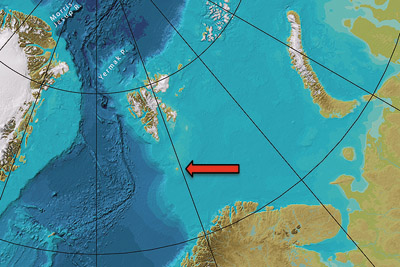