The Norwegian coal mining company in Spitsbergen, Store Norske Spitsbergen Kulkompani (SNSK), has been in difficulties for a while (see December news: Coal mining not profitable: Store Norske cuts 100 jobs). The low world market prices for coal are the main reason. The SNSK has already cut a large number of jobs, which is reason for nervousness in a place as small as Longyearbyen, which may suffer strongly from a significant loss of jobs, both economically and socially.

Hence, a decision by the Norwegian government comes as a relief for many in Longyearbyen: As minister of economic affairs Monica Mæland announced during a press conference, SNSK will get a credit of 500 million Norwegian kroner (about 60 million Euro). The company had asked for 450 million NOK, less than it will actually get now.

Mæland made it clear that the credit does not come without some conditions: it is not to be taken as a guarantee for the long-term existence of coal mining in Spitsbergen. Future government politics in Svalbard, which set the framework for the development, are to be defined in a government policy statement (“Svalbardmelding”), which comes every 5-10 years. The next Svalbardmelding is currently under preparation in the ministry of justice. The current credit still needs approval from the Storting (Norwegian parliament). And the land property of the SNSK, which is an important local land owner, is to be transferred to the government. This shall strengthen Norwegian sovereignty and is likely to be more of a symbolic character, rather than having major practical consequences.

The credit for SNSK has led to common relief in Longyearbyen.

Coal mining in Spitsbergen: an industry with future or only with a lot of history? 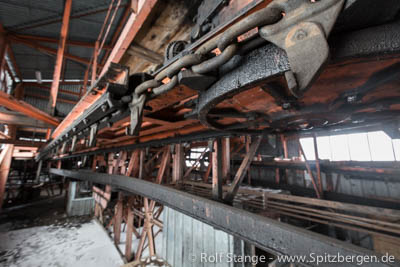