Home → * News and Stories → Glaucous gulls: The population in Svalbard is under pressure

Glaucous gulls: The population in Svalbard is under pressure

Researchers of the Norwegian Polar Institute reported about a significant decline of the glaucous gull population on Bear Island, the most important breeding area for glaucous gulls in Svalbard and the Barents Sea. During the past few decades a permanent decline of the population was recognized on the island. An extended monitoring shall now find out if this trend can be confirmed for other regions of Svalbard.

Besides factors like food shortage and climatic changes the reason for the decline is more and more seen in the bird´s increasing contamination with environmental toxins (heavy metals, PCBs, fluorine, …). The birds receive environmental toxins with their food and accumulate them for example in their brains and livers where they affect the animal´s health. On Bear Island continuously dead and dying birds with a high contamination were found. In previous studies Norwegian researchers found out that glaucous gulls with a low contamination survived with a relatively high rate of 91.5 % while only 40-50% of those with a high contamination survived the current season (see also Spitsbergen-Svalbard.com news Glaucous gulls threatened by environmental toxins from March 2012). As predators, standing at the top of the food chain, glaucous gulls also give a good indication for the condition of the ecosystem they live in.

On the Norwegian Red List of Threatened Species the glaucous gull population in Svalbard is currently listed as ‘near threatened’ (‘nær truet’). If the alarming trend on Bear Island will be confirmed for the whole of Svalbard, the status might be upgraded to ‘endangered’ (‘truet’). Observations in Iceland and Canada also documented a significant decline of the glaucous gull population while the population in Greenland, Alaska and Russia seems to be stable. But for these areas, and especially for Russia, the database is not sufficient.

Glaucous gull in Spitsbergen, the population ist under pressure. 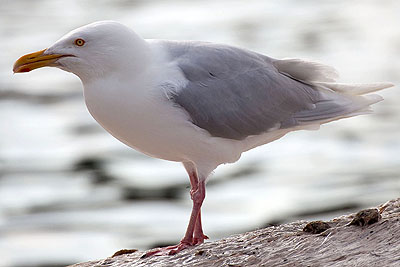