United Nations Secretary-General Ban Ki-moon is currently on an official trip in Svalbard. The visit is part of the UN´s campain in preperation of the upcoming UN Climate Change Convention in December 2015. Ban intends to get an overview over the local effects of global warming in the Arctic and to use the publicity of his visit to primarily inform about the alarming extend of glacial melting.

On Tuesday Ban arrived at the airport in Longyearbyen, accompanied by the Norwegian Foreign Minister Børge Brede. The guests were directly taken to the Norwegian research vessel ‘Lance’, which had recently returned from a research operation in the ice, north of Svalbard. Onboard the ‘Lance’ they were brought to Ny-Ålesund where scientists of the Norwegian Polar Institute informed Ban about the situation in Svalbard. Afterwards they took a boat trip to the edge of the glacier Blomstrandbreen, which had melted significantly since Ban’s last visit in 2009. The next stop on the tour is again Longyearbyen. 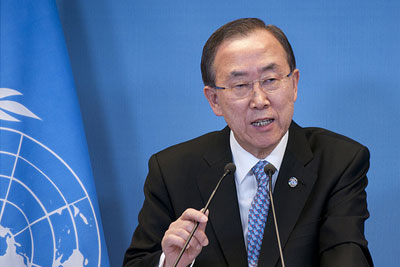