It is as if someone had pushed a button in the weather system of the far north some days ago. After the calm weeks that we had until mid July, we have now got the second period with strong winds in Spitsbergen. The first one wasn’t much of a bother to us, as we had spent some very enjoyable days in the shelter of inner Kongsfjord, as the reader may remember. Right now, we have heard that a full-grown storm is raging around Sørkapp (the south cape), and sailing boats wait in Longyearbyen for the wind to calm down before they leave.

Last night, the anchor was dragging in Murchisonfjord, Arctica II was vigorously pulling on the chain in the gusts. It was kind of ok until the morning, but it was clear that this was no place to spend more time than necessary. A bay that provides shelter not only from the sea but also from the wind, that would be good now. 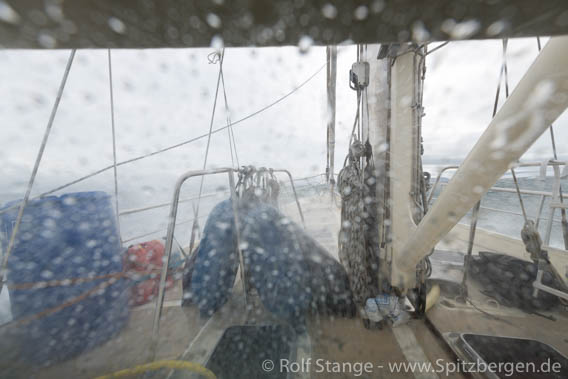 Additionally, we have got the information that there is movement in the ice off the eastern tip of Spitsbergen. So far, the passage from southern Hinlopen to Heleysund had been blocked by dense drift ice, but now it seems to be open. This passage is not very long, but currently the crucial bit with regards to a potential circumnavigation of Spitsbergen. Now we are half-way through the voyage, time-wise. If we want to sail around Spitsbergen, then we have to keep an eye on time. 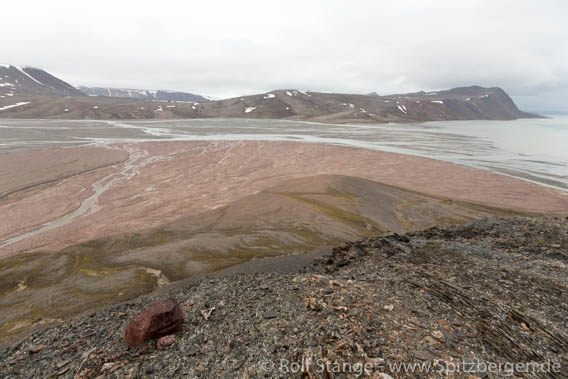 Enough reasons altogether to leave Murchisonfjord and set course southwards in Hinlopen Strait, even if that involves rough sea for a couple of hours. But not for too long. It was nice to walk on solid tundra ground later in Lomfjord.