As mentioned, this was not all this day should bring. We were thinking about a little late afternoon landing, hoping to find a reasonably sheltered spot. We forgot about that quickly. The wind was one aspect. Admittedly, when I saw the wind blowing out of the bay and on to the shore of our envisaged landing site, I was already thinking how to get out of it again. But that was not even necessary. Suddenly a polar bear was seen walking on the slope not far from the place and that attracted of course everybodies attention. It walked along the coast, we indeed a lonesome walrus was lying, passing it within a few metres initially without paying attention (is it really possible that he was not aware of it to begin with?). Then he recognized it, made some steps towards it, probably hoping for a big meal, but the walrus demonstrated with a quick movement of its mighty tusks that this might be a bad idea. 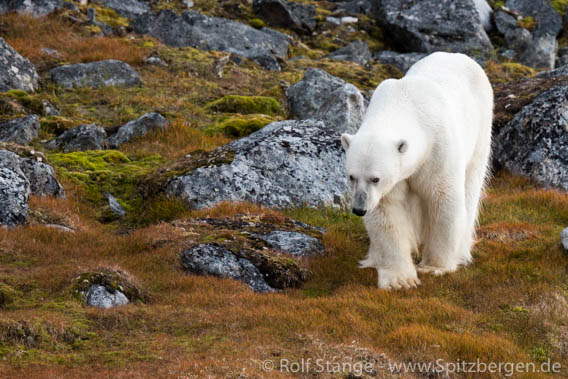 The bear continued and it was kind enough to do so in an area where Joachim could maneouvre the Antigua reasonably close to the shore. It was certainly close enough for me, otherwise I would have had to remove the tele converter … the final highlight of the day was a stunning set of sunset colours above an amazing scenery. So now the day is over. The second day of the trip, and it could not have been better! 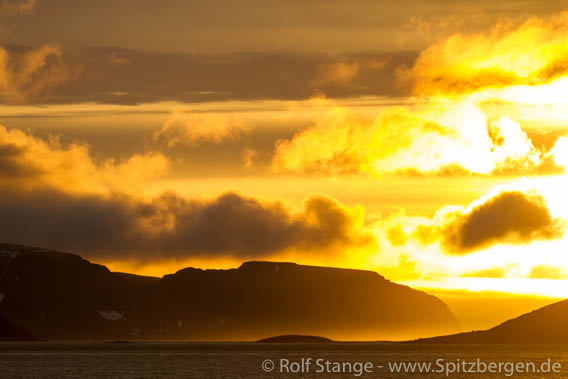 Now we are curious about tomorrow. Even more wind is expected – we shall see.