Home → * News and Stories → Hiking to Pyramiden in the polar night

Hiking to Pyramiden in the polar night

Hiking from Longyearbyen to Pyramiden in the polar night does not sound like a good plan. Not having serious equipment does not make it better. If you start such a demanding journey without at least a good sleeping bag, solid winter hiking boots and a weapon (and a lot of other stuff), then you are either crazy or suicidal.

So nobody would even think of this? Wrong. Yesterday (November 23), the Sysselmannen (police; search and rescue agency) had to go out by helicopter to search for a tourist from England who had left Longyearbyen and told people before that this was exactly what he intended to do – on his own. Some locals he had been talking to had contacted the Sysselmannen.

As it turned out, the many warning the man had received had already been enough to make him change his mind: he had already abandoned his ideas of a hike to Pyramiden, instead opting for a much more reasonable walk to mine 7.

The distance to Pyramiden is 50 km as the crow flies, but the distance over land is well over 100 km, especially as the fjords are still open. There are several crevassed glaciers on the way: altogether, an impossible task in darkness for a single person.

The last part of the overland route to Pyramiden: Nordenskiöldbreen and Billefjord (frozen). 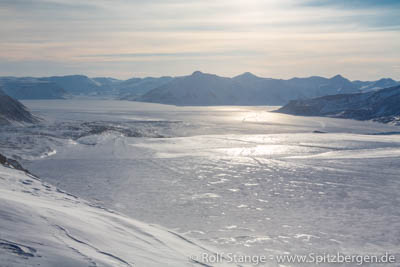