The current ice chart of Svalbard is heartbreakingly white. After a good ice winter in 2014-15, with a lot of ice especially on the east side of Spitsbergen, the current early winter is a complete disappointment:

Ice chart of December 9, 2015 from the Norwegian Meteorological Institute. The seas around Svalbard are completely ice free. 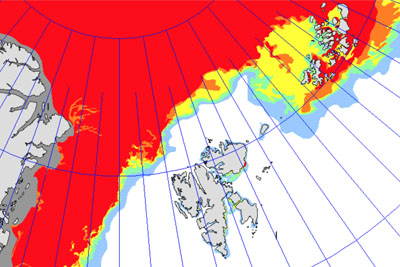 All over the arctic, the current ice situation is within the lower range of the average of recent decades. According to the National Snow and Ice Data Center, November 2015 is on place 6 of the negative list of bad ice years, but within two standard deviations of the average, which can be called “lower average” to keep things easy. But in the Svalbard region, things look worse. After a very ice-rich winter in 2014-15, which gave the polar bears a good reproductive season, the current season does not start good at all. The last November with so little ice was in 1991.

Even those areas in eastern Svalbard which traditionally have a lot of ice like Nordaustland, Kong Karls Land and Hopen are currently completely ice free. This means trouble for pregnant females who need to get to suitable areas to get established in snow caves where they should give birth in just a few weeks from now. Some females may already be on these islands, and in theory, others may swim there. Generally speaking, polar bears are excellent swimmers and easily able to cover amazing distances in the water. Pregnant females, however, need to be very careful with their energy reserves, as they are totally dependent on their fat reserves for several months around birth. She cannot hunt and eat between late November and late March and has to survive herself and feed her offspring (usually two cubs) entirely on her fat reserves.

Traditionally, females return to the same denning areas to give birth. It is uncertain if at least some have currently moved further east to Franz Josef Land, where ice conditions are currently better. But if they know that ..?

Ice conditions have always been varying strongly from year to year, but the trend to bad ice years is clear, in spite of the strong ice winter 2014-15. Altogether, a clear sign of ongoing climate change, making clear how important a strong result of the current climate negotiations in Paris would be.

Polar bear family in July 2015 in Hornsund: good ice conditions especially before and after birth are of vital importance. 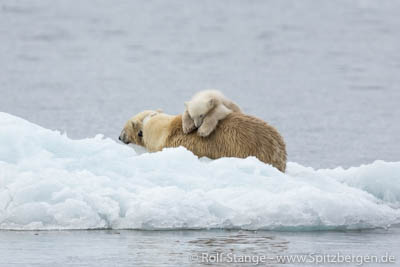