Heaviest storm in Longyearbyen in 30 years: houses damaged by avalanche

Since days ago, there had been storm warnings for Svalbard for the last night, forecasting winds up to hurricane force. The storm that hit last night was the strongest one in Longyearbyen in 30 years. There have been several damages in Longyearbyen, the most dramatic one being houses which were damaged by a snow avalanche that went down from the western slope of Sukkertoppen, a smaller mountain on the corner between Longyeardalen (where most of the settlement is located) and Adventdalen. As far as is known, 10 houses were damaged. All rescue forces available and many volunteers are on location to help and to look for people. It is unknown if people have suffered injuries or worse. The damaged houses are the “Spisshusene”, a row of houses near Sukkertoppen in a part of Longyearbyen known as Lia (the row of colourful houses where the Arctic cotton grass is flowering so beautifully in summer). Some of the houses have been moved, it is said that the dislocation was up to 20 m at least. Some of the houses were probably empty as they had been used by employees of the mining company Store Norske Spitsbergen Kulkompani, which had to dismiss a large number of miners recently. Others may already be in mainland Norway for Christmas. Other houses are currently occuppied, including families with little children. At least, there is so far no information about people being injured or even worse.

During the last night, local attention was more focussed on the dogyard in Adventdalen, where several people were on watch to look after the dogs. Everything seems to be well there, considering the circumstances.

Several roofs have been damaged by wind, including the roof of the school.

There is so far no information about possible damage in Barentsburg or other settlements and stations in Svalbard.

An impression of the place of the avalanche. Photo (c) Svalbardposten. 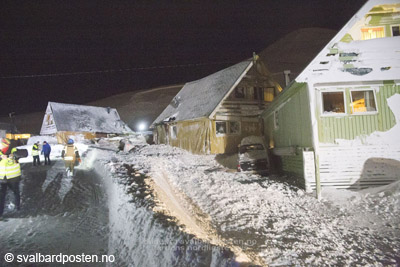 Our thoughts are with the people in Longyearbyen!