Soon after the evacuation was lifted on Tuesday evening it turned out that more houses are damaged so strongly that they have to be abandoned. The inhabitants had to leave them again soon. The houses are located in Vei 228 (yellow circle in picture below) and owned by the state-owned Statsbygg, who was at least able to quickly provide replacement accommodation. It is at least possible to return to the buildings to get personal belongings.

This is more luck than those have who lived in the now strongly damaged houses (red circle) hit by the avalanche with full force. This area remains closed to all non-authorized traffic according to Lokalstyre (the local administration), who will make a plan how the former inhabitants can get their personal belongings.

Queen Sonja of Norway and minister of justice Anundsen visited the avalanche site on Thursday afternoon.

A family who have lost their home in Vei 236 and almost their lives have now published their dramatic experience of the avalanche in Svalbardposten. They were in their kitchen, having breakfast with their two little children and a friend when the avalanche hit. They were completely buried in snow before anyone could react and they just managed with a lot of luck and the power that comes from desperation to get themselves at least partly out of the snow until help came. Altogether it took about three quarters of an hour to get everybody out. They were buried under up to two meters of hard snow, mixed with sharp fragments of wood and other debris. They were taken to hospital and partly treated for hypothermia in advanced stages. Due to an amazing amount of luck and a lot of help during and after the dramatic event, they are all well now.

The residential area hit by the avalanche. The houses marked by the red circle are largely destroyed. As it turned out now, some buildings in Vei 228 (yellow circle) also have to be abandoned. 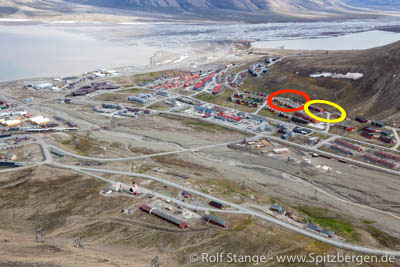