Home → * News and Stories → Another temperature record in Spitsbergen

Another temperature record in Spitsbergen

Temperature record from the weather anywhere in the world, especially from the arctic, are getting more and more common these days. On Friday (October 07), the weather station at the airport near Longyearbyen recorded 10.1 degrees (C). This was the first time a value higher than 10 degrees was reached in any October since temperature recording started. The highest October temperature so far had been 8.9 degrees, measured in 1984. In 1961, 9.9 degrees were recorded. Back then, the weather station was in Longyearbyen itself and not near the airport (which did not exist back then) and different measuring devices were used. The values can, accordingly, not be compared directly. Especially the different location, though only a few kilometres apart, may make a significant different. The locations, near the shore of the large, open Isfjord or in Longyearbyen which is situated in a valley, are meteorologically quite different.

Very impressive is another bit of information, which is easily getting overlooked and lost in a sub-clause: the currently last time that a month was colder than the monthly long-term average was in November 2010, sad 6 years ago.

The ice situation around Spitsbergen is currently also rather sad. It has been suggested that last year’s poor sea ice conditions were linked to the El Nino phenomenon, which was strong then in the south Pacific, with global consequences for weather and sea currents. There has, so far, not been any improvement regarding the sea ice near Spitsbergen.

October brings the polar night to Longyearbyen. That does usually not involve temperatures around 10 degrees above freezing. 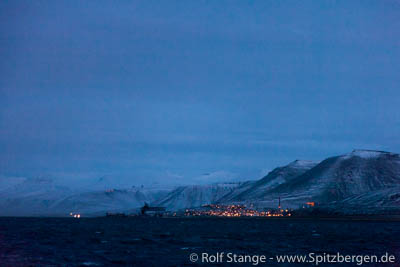