All evacuations in Longyearbyen have been cancelled. The weather is calm and the authorities have estimated the situation as safe. Slopes that may produce landslides will be monitored.

The way west of the camping site towards Bjørndalen remains closed. This makes an area inaccessible where many locals have leisure huts. It is possible to walk to the huts, which is, however, not practicable for many purposes. The huts will only be accessible again by regular means when the road is opened again or the terrain is suitable for snow mobile traffic. Neither of these options is currently in view.

Some of the huts in this area will have to be moved or abandoned. It has happened before in Spitsbergen that huts endangered by coastal erosion where moved. The most famous example is Fredheim, the famous trapper hut in Tempelfjord, which was moved away from the coast in 2015. One or the other hut between Vestpynten (near the camping site) and Bjørndalen will receive a similar treatment and be moved at least to the other side of the road.

When and how the way itself will be secured or relocated is another and currently unanswered question.

The famous trapper hut at Fredheim was moved away from the coast in spring 2015 due to coastal erosion. 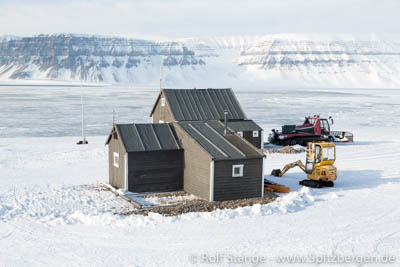