Home → * News and Stories → Autumn in Spitsbergen breaks all records

Autumn in Spitsbergen breaks all records

Even though it is gradually getting colder in Spitsbergen, the news about record-breaking temperatures in the Arctic are not stopping. For six years, Svalbard has been significantly warmer than usual, and the temperatures in November were up to 10 degrees above average.

The consequences of some days of extreme weather with strong precipitation in November: At least 50 landslides and avalanches were observed, parts of Longyearbyen even had to be evacuated.

Climate change also threatens the shores, houses and huts. The sea has eroded the unfrozen, loose ground, which in November should have been hard by frost. The hut on the left in the picture had to be left for safety reasons. Image: ©Rolf Stange 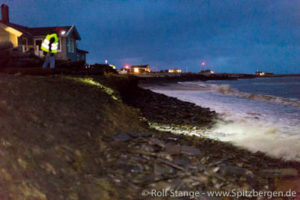 Also in other parts of the Arctic it becomes obvious: It is quickly getting warmer than before. This applies both to the temperatures on land as well as in the sea, where up to four or even five (Isfjord, near Longyearbyen) degrees more have been measured. In some Arctic regions, the air temperature was actually 20 degrees above average (north pole).

And never before has there been so little ice on land as on the sea. Tricky: ice reflects the sun’s radiation. The less ice floats on the sea, the darker the sea surface and the more sunshine is absorbed. Researchers are worried that the summer sea ice might disappear completely from the Arctic.

In Longyearbyen, nobody is currently expecting a good ice winter with frozen fjords for the 2017 season.

On Spitsbergen it has been observed for some time that the permafrost ground is getting warmer and begins to thaw. This can lead to settlement damages on buildings, as they are currently already observed in several cases in Longyearbyen. In other Arctic regions such as Siberia, the thawing of permafrost ground in marshy areas, which have stored a lot of organic material in the cold soil, also leads to the release of large amounts of the highly aggressive greenhouse gas methane, which further stimulates climate change.

Climate change is no longer a scary newspaper message on Spitsbergen, but an everyday experience with effects on peoples’ daily life. More warm winters, avalanches and landslides and evacuations have to be expected in Spitsbergen in the coming years.