October had already been quite extreme in Spitsbergen, with unusually warm temperatures and a lot of rain. There were mudflows from Platåberg across the road between the church and Huset, the road was temporarily closed.

Now it is getting worse: up to 50 mm precipitation or even more are expected during the night from Monday (November 7) to Tuesday. Below 500 m altitude the precipitation is expected to fall as rain. Several roads in and near Longyearbyen are closed and houses in several roads are evacuated because of the risk of avalanches.

The Sysselmannen has issued several warnings. Amongst others, people are requested to stay away from steep terrain and from old buildings such as mines and parts of the old coal cablecar, which may collapse in extreme winds.

The danger of snow avalanches in higher terrain is high (stage 4).

The weather is expected to calm down Tuesday morning. Fingers crossed all goes well until then.

P.S. Personal remark for friends of the author: our home in Longyearbyen is not in the concerned area. 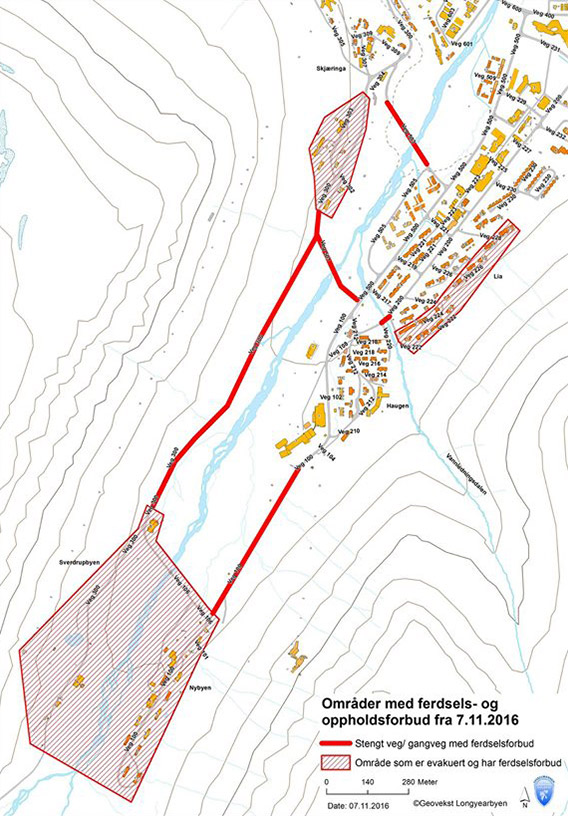 The marked parts of Longyearbyen are currently (November 7) closed due to the extreme weather. Map © Sysselmannen på Svalbard.