White humpback whales are a very rare phenomenon. Globally, scientists know of three individuals. Two of them live in Australian waters and a third one in the north Atlantic. The latter one has recently been seen again for the first time in years. First sightings date back to 2004 and 2006, then near the north Norway coast. In August 2012, a white humpback whale was sighted several times east of Spitsbergen. It was most likely the same animal as in 2004 and 2006. No photos are known from those early sightings, but in 2012, a number of amazing shots were taken. Especially noteworthy are those taken by Dan Fisher, mate on the sailing ship Antigua, from the mast of the ship. Due to the high perspective, almost the whole animal can be seen on the photos.

Humpback whales live in all of the world’s oceans. They are usually mostly dark grey to black. The bottom side and parts of the fluke and flippers are partly white. The exact pattern can be used to identify individuals, just like the fingerprint of humans.

Now, there has been a sighting of a white humpback whale in the north Atlantic, the first one since 2012. The whale was seen in late September by scientists on board the research vessel Johan Hjort in eastern Svalbard. This area is often frequented by humpback whales at this time of the year. 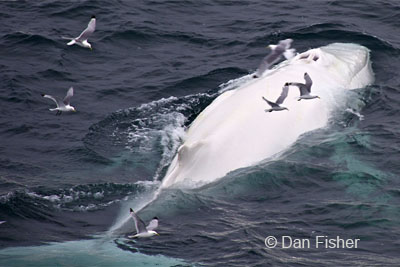