Several polar bears have been seen near Longyearbyen and other settlements in the past few weeks.

Polar bears look cute, but can be nasty when they are looking for food 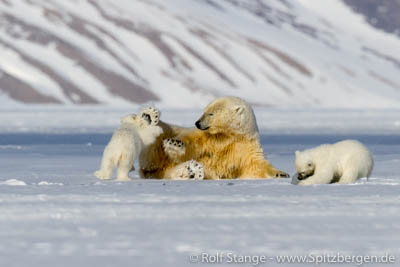 One of the bears – a 17-year-old male – had to be anesthetized and transported by helicopter to Nordaustlandet in the north-east of Spitsbergen, after devastating several huts at Kap Laila River between Longyearbyen and Barentsburg on 15 September. Polar bear expert Jon Aars from the Norwegian Polar Institute confirmed, that this was already the bears second flight with a helicopter. The polar bear was marked as a cub and already registered in 2001, when he destroyed a hut together with his brother and mother. The mother was also observed later in similar burglaries.

This is not an unusual behavior for a polar bear, says Jon Aars. Some polar bears even seem to have specialized in hut burglaries. But to stun the polar bears and fly them out can just be a short-term solution. Last year in April a polar bear from Longyearbyen was flown to the island of Nordaustland several hundred kilometers away. Only one year later he was back at the Isfjorden.

At the beginning of September, a female polar bear with two cubs was observed at Revneset – a few kilometers north of Longyearbyen. Three attempts have already been made to hunt them away by means of a helicopter. The three bears returned twice after a few days and reappeared near Longyearbyen. After the third attempt, the bears have not yet been seen again.

Another polar bear with two cubs was observed near Svea and several bears were seen near Isfjord radio at Kapp Linné the last month.

The fact that so many polar bears appear in the vicinity of human settlements in such a short time does not occur too often, but is probably coincidence. Jon Aars believes that such visits could occur more often in the future, as polar bears have been protected for many years. Genetic research shows that polar bears tend to visit the same areas for several generations. People in Longyearbyen will probably have to get used to frequent visits of polar bears. Or the other way around. 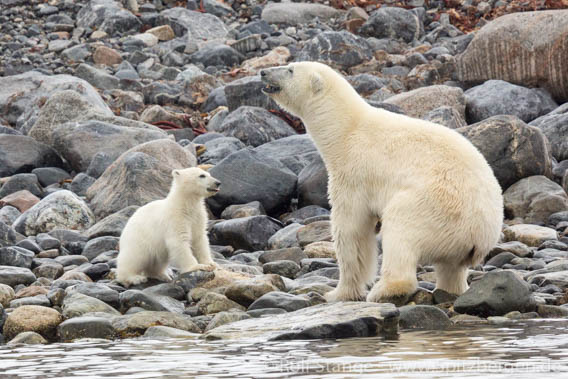