In the high arctic, January is icy cold – usually at least. Sometimes, spells of mild air masses from the Atlantic can bring temperatures fluctuating around zero degrees and rain. That was not totally unknown in the first half of the 20th century eithe, but it is certainly more frequent in the times of climate change. But normally, it is really cold! The temperatures will make every river and every waterfall freeze solid.

The January page of the Spitsbergen calendar 2018 shows the waterfall Hyperittfossen in De Geerdalen, about 20 km northeast of Longyearbyen as the ivory gull flies. The watermasses that fall down over basaltic rock cliffs are quite impressive in the summer. Now in the winter, the water is frozen to create structures like organ pipes. I used a rather extreme 11 mm wide angle lense to capture the perspective. It is not every year that the shapes of the frozen waterfall are so impressive: when I took this panorama of Hyperittfossen some years ago, most of the icy structures were hidden under snow. 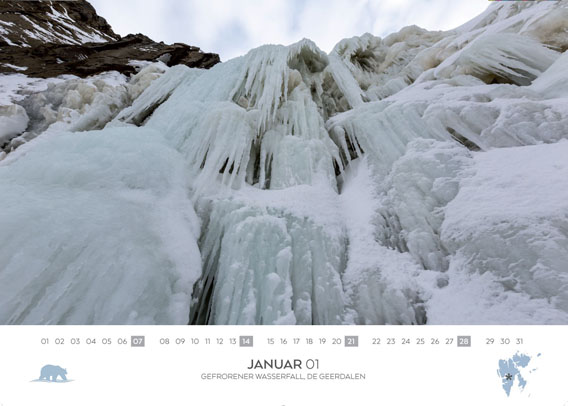