The wreck of the Russian helicopter that crashed into Isfjord close to Barentsburg previous Thursday was lifted last night. The special ship Maersk Forza was brought to Spitsbergen for this task and completed the work successfully on the night from Friday to Saturday. There were 8 persons on board the MI-8-helicopter when it crashed, including 5 crew members and 3 scientists. One body had already been found some days ago about 130 m away from the wreck. There is no trace so far from the other crew members, and the search for them will be continued.

The cockpit voice recorder could secured together with GPS units which are expected to have the actual flight track saved. They will be brought to Moskva for further investigations.

Meanwhile, questions are raised regarding the cause of the crash and the circumstances of the flight. The data recorders that were secured are likely to shed light on the actual crash. It seems that the flight was not legal according to applicable Norwegian legislation. The Norwegian flight permit issued to the operator covers only flights in direct combination to the operations of the mining company Trust Arktikugol, for example transport of company employees between Longyearbyen and Barentsburg. Commercial flights and transportation of tourists and scientists are explicitely excluded.

There were 3 scientists on board the helicopter when it crashed.

The wreck of the Russian helicopter, which crashed on October 26 close to Barentsburg into Isfjord, on board the ship Maersk Forza (photo © SHT). 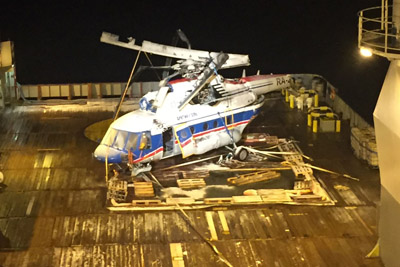