A fishing vessel got into serious trouble in Hinlopen Strait in northern Svalbard, as the SAR central in north Norway informed. The Norwegian ship “Northguider” had raised the alarm at 1322 hours (local time) today (Friday), whereupon the SAR machinery in Longyearbyen and north Norway was put into operation. Soon, both rescue helicopters went up in Longyearbyen, the first one arrived on scene at about 1515 hours, less than 2 hours after the alarm bell had rung in the SAR central in north Norway. At the same time, an Orion aircraft took off from Andøya in Norway. Depending on the exact type, these aircraft may be used in SAR missions for example to search for missing vessels or persons or to survey potential oil spills. 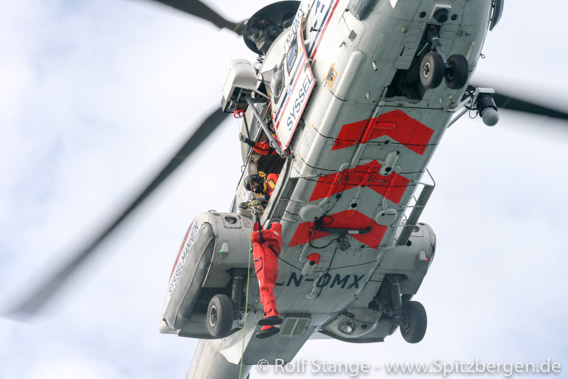 SAR helicopter of the Sysselmannen, here seen during an exercise.

But the good news is that all persons seem to be well. The crew of 14 have dressed up in survival suits and gone to the bow area to be picked up by the rescue helicopters. According to the ship owner, all persons are supposed to be well, at least considering the circumstances. Nobody is injured or has been in cold water.

The Northguider appears to have hit the ground on the coast of Nordaustland south of Murchisonfjord. She is now sitting on the ground and listing with 20 degrees but the position seems to be stable so far. The weather – about 18 degrees centigrade below freezing, darkness and strong wind (Beaufort 6) – makes the rescue operations challenging, but there is no reason to believe that the Norwegian SAR professionals are not able to get all crew members off soon. 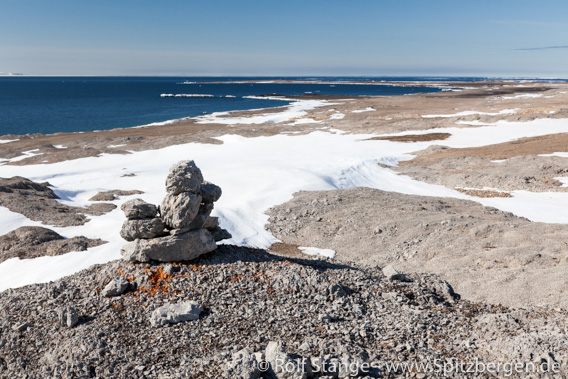 Kalkstranda in Hinlopen Strait, south of Murchisonfjord: the Northguider is supposed to have run aground somewhere here. Conditions there are quite different from the photo now, with darkness, cold and wind.

The coast guard ship KV Barentshav has set course for Hinlopen Strait, but is not expected to arrive there before Saturday. Polarsyssel, the Sysselmannen’s service ship, is not available in Spitsbergen in wintertime.

Update: the SAR central North Norway informs that all 14 persons were taken into the helicopters and are by now taken care of in Longyearbyen. The Northguider is still sitting on the ground, taking in water.