Spring has also arrived in arctic Spitsbergen. Early migrating birds such as the snow bunting and Little auk came already more than a month ago in April, filling the tundra in and around Longyearbyen respectively the mountain slopes with their singing (snow bunting) and crazy laughter (snow bunting).

Temperatures are still cold, mild frost, but the snow-free tundra patches are growing every day and the rivers show signs of breaking up. 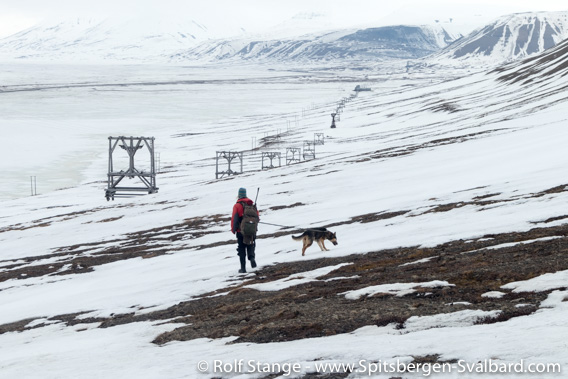 Tundra is coming through the snow in Adventdalen.

By now, most migrating birds have returned to their summer territories. A good week ago, the first Pink-footed geese were suddenly sitting, well camouflaged, on the tundra next to the roads in Longyearbyen, and the first Barnacle geese followed soon. 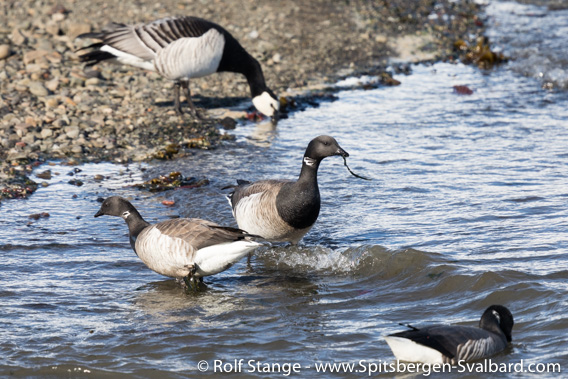 Brent geese on the shore of Adventfjord (a Barnacle goose in the background).

Once the first geese had arrived, dozens and hundreds followed during the next couple of days to settle down on snow-free tundra areas in Adventdalen and even within Longyearbyen. In this area, the snow melt starts regularly a couple of weeks early than elsewhere in Spitsbergen, making the tundra areas here an important resting area for many birds, which feed on tundra vegetation, after their spring migration. Later they will disperse to their various breeding areas within the region. 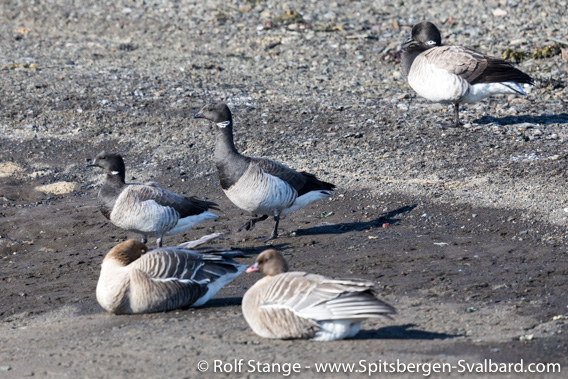 Brent geese on the shore of Adventfjord (Pink-footed geese in the foreground).

Currently, it is very easy to observe all geese species that breed in Spitsbergen as well as Common eider ducks, King eider and many otehr species very close to or even within Longyearbyen. Soon they will move to more inaccessible areas and then most of them will also be very shy. Then, it will be much more difficult, if not impossible, to secure good observations and photos, even with good equipment.

Especially the Brent goose is a difficult species to observe. It is not an everyday sight during the summer and observations are usually from a greater distance. So it is a special pleasure to see this species on a short distance on the shore of Adventfjord just next to Longyearbyen. As long as you stay a bit hidden or within a car, the risk of disturbance is low. 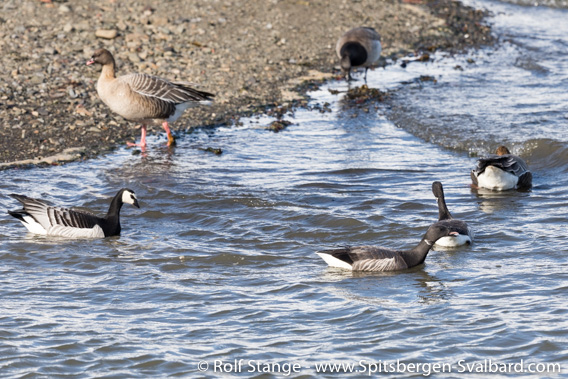 All three species of geese that breed in Spitsbergen in one photo:
Pink footed goose, Barnacle goose and Brent goose, Adventfjord.

I am almost a bit proud of this last photo that has all three species of geese that breed in Spitsbergen in one frame: Pink footed goose (upper left, not sharp), Barnacle goose (lower left) and Brent goose (lower right).