On June 24, a group of tourists and guides approached a walrus herd hauled out on Nordaustland, when a small plane appeared, flying repeatedly very low over the walrusses which started to show signs of panic. The plane, a Dornier 228, was flying for the Norwegian coastguard, who „controlled“ cruise ships and contacted them to gather information about the numbers of passengers and crew on board; information which the Sysselmannen has from the mandatory application process prior to all cruises.

According to the Svalbard environmental act, all traffic has to be done in such a way to minimize disturbance of humans and animals. All aircraft have to keep a distance of 6000 feet from known walrus colonies. The actual distance in this incidence was a small fraction of 6000 feet.

According to the Sysselmannen, the required distance was possibly „forgotten“. The incident does not seem to have consequences for those involved beyond a gentle reminder of legal requirements. 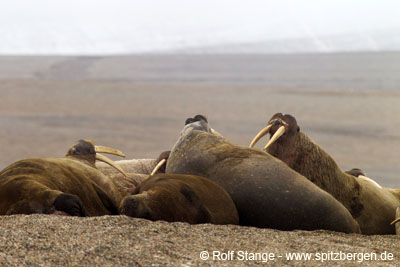