Polar bears can have high concentrations of heavy metals and other long-lived environmental toxins in their tissue. These toxins come from industry and agriculture in lower latitudes, are transported by air and sea currents even to the remotest parts of the Arctic where they are taken up in the food chain, finally contaminating those who are at its top: Polar bears and birds including Glaucous gulls. Consequences include negative impacts on reproductive and immune system and general health decline.

A new study has shown different levels of mercury concentration in Polar bear liver in different parts of the Arctic, from Alaska through Canada to Greenland. The reason for the regional differences is believed to be different species in the lower part of the food chain: plancton species that are responsible for the incorporation of mercury into the food chain.

There are no data from Spitsbergen, where Polar bears are protected and Polar bear liver is accordingly not available for sampling.

Polar bears: as if their life was not already difficult enough without mercury. 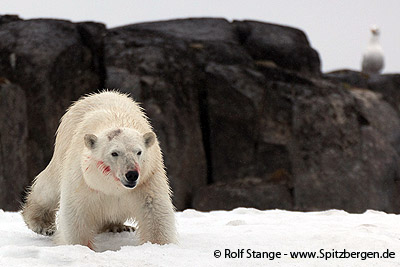