A recent visit of the Norwegian environmental minister Bård Vegar Solhjell to the research settlement Ny Ålesund in Kongsfjord has put climate change back in the political debate in Norway. According to leading local scientists, the boat excursion into Kongsfjord would have happened with snow mobiles just 10 years before, following exactly the same route. The loss of solid fjord ice in many fjords on the west coast of Spitsbergen especially during the last 2 years is indeed alarming. This leads to massive problems for example for Ringed seals, who cannot give birth and raise their offspring without good fjord ice. Hardly any Ringed seal, generally the most abundant arctic seal, has been born and raised successfully in Kongsfjord in recent years.

The loss of solid fjord ice in the fjords on the west coast of Spitsbergen especially during the last two winters is indeed dramatic. This involves problems for example for Ringed seals, which need solid ice and good snow conditions to raise their offspring successfully. Hardly any young Ringed seal has survived in Kongsfjord during the last 10 years.

The increase of sea surface temperatures on the west and north coasts of Spitsbergen during the last 2 years is significant and has reduced the drift and solid ice considerably. In eastern Spitsbergen, the development is less dramatic and the ice conditions are comparatively normal. On the west coasts, many fjords remain largely open. Mostly, only inner reaches of the fjords are frozen over.

The Norwegian environmental minister has spoken of clear signals for an already ongoing warming. 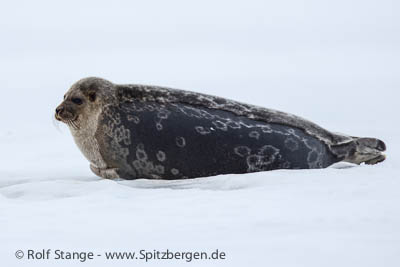