Home → * News and Stories → Helicopter base on Bear Island (Bjørnøya)?

Helicopter base on Bear Island (Bjørnøya)?

There is a growing debate within the Norwegian oil and gas industry and politics about a helicopter base on Bear Island (Bjørnøya), a relevant issue in view of growing activities of the industry in the northern Barents Shelf area, which cannot directly be reached by helicopters from north Norway. To reach these remote areas, all helicopters including search-and-rescue helos need to refuel on Bjørnøya, an operation that takes time and resources which might be crucial in cases of emergency.

Bjørnøya was declared a nature reserve in 2002, which is the strictest protection status an area can get. Excluded is a small area around the weather station in order to keep the activity there away from trouble. But already before the Bjørnøya Nature Reserve was declared, the Norwegian government made clear in a governmental declaration (Stortingsmelding Nr. 9, 1999-2000) that protective legislation might be removed for some areas to establish infrastructure connected to activities of the oil and gas industry. A suitable area was already identified on the north coast of the island, east of the station.

The question of SAR and oil spill facilities becomes more and more important in the light of increasing industrial activity in the area.

Coastal landscape on northeastern Bear Island (Bjørnøya). Strictly protected as nature reserve, but nevertheless possibly the neighbourhood of a helicopter base in the future. 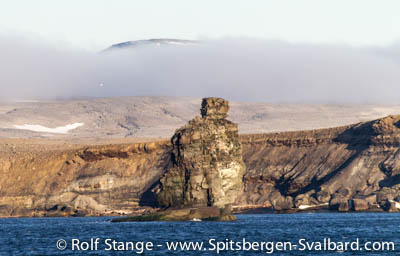