The mining company Store Norske (SNSK) has opened the new coal mine at Lunckefjellet, between Sveagruva and Reindalen, officially on Tuesday (February 25). Next to miners and company officials, the local adminstration from Longyearbyen and Norwegian media were present at Lunckefjellet. Miner Terje Nyland has cut the symbolic cord to mark the opening. He was determined to do so by lot, rather than an official taking the job, a nice gesture by the mining company.

It is 14 years ago a new coal mine was opened on Svalbard for the last time.

The first ton of coal left Lunckefjellet already on October 25 as part of the preparations for mining, which are now almost finished. Soon, everything is supposed to be ready for a daily production of 10,000 tons coal.

SNSK is currently experiencing economically challenging years. Prices on the world market are under pressure, and the risk connected to exchange rate fluctuations is high. A 1 % loss of the dollar rate may cost the company up to more than 1,2 million Euro. The last time Store Norske has finished a year with a positive result is several years ago. A negative result is expected also for 2014, although the pressure is expected to lessen due to first benefits of the new mine. On the other side, costs for the opening of the Lunckefjellet mine as well as increased costs at Svea Nord, where production is getting into marginal stages, are increasing the pressure.

Store Norske has published the following figures for 2013:

The economical situation of the new mine at Lunckefjellet, planned to be productive for 6-7 years only, is described as marginal by company leaders already given current market conditions. Store Norske invests in research which is supposed to increase sales prices or generate additional income from, for example, technical upgrading of coal. On the long term, the company has hopes for further new mines near Sveagruva (at the mountain Ispallen) and Longyearbyen (Operafjellet).

New future mines are politically uncertain. People in Longyearbyen are, however, aware that coal mining is still by far the most important single economical factor to support local jobs and accordingly the population of Longyearbyen. 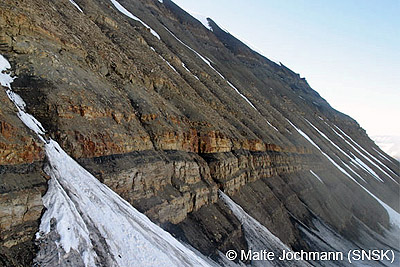