On Sunday, a skier fell 25 metres down into a crevasse in a glacier on Nordenskiöldfjellet near Longyearbyen. With a lot of luck and swift reaction by the local SAR forces, the man could be rescued essentially without injuries.

The mountain Nordenskiöldfjellet, 1050 metres high, is the southern, higher part of Platåberget and a popular destination for sportive outings from Longyearbyen. The crevasses in the higher, steeper part of the glacier are not unknown. Common routes lead either over parts of the glacier generally assumed to be safe (in a distance of the crevasse in question) or over rocky ridges at either side to the glacier. The latter option is difficult or impracticable in winter, when the rocks, which include some steeper steps, are frozen over with ice.

The skier was in a group of altogether 9 persons who were on the way down from the summit. On the way, the 9 had split up into 2 groups. Once the man, who is in the mid twenties, had fallen into the crevasses, his comrades did not dare to move anywhere, but alarmed the Sysselmannen. Rescue forces of Sysselmannen and Red Cross where soon on the scene with 2 helicopters and after about 2 hours in total the man was in safety again, luckily without any injuries despite a falling distance of 25 metres. It can be assumed that the crevasse was not vertical, which would not be uncommon for a crevasse near the steep contact between ice and rocks at the higher end of a glacier.

The position of the crevasse is given as N78 10.95 E15 26.55 by the Sysselmannen, which is in accordance with the crevasse marked in the photo below. The photo was taken on July 19, 2009 and shows the glacier with less snow cover than currently. At the time of the accident on last Sunday, the crevasse was covered with snow and accordingly invisible at the surface.

Glacier at Nordenskiöldfjellet (archive image, July 2009). The crevasses near the upper end are partly visible. On Sunday, a skier fell 25 metres deep into a crevasse in this area. 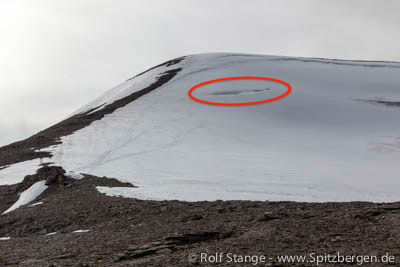