The sudden surfacing of the powerful Russian politician Dmitry Rogozin, vice premier and leader of the Russian government’s new Arctic Commission, stirred Norwegian officials up. Rogozin is on an EU sanction list and not welcome in Norway, as was subsequently made clear by the Norwegian government.

It is not known how Rogozin, who made his arrival known via twitter, arrived at the airport at Longyearbyen, but it is safe to assume that he did not travel trough mainland Norway. Rogozin soon continued to the Russian drift ice station Barneo near the north pole, where he made further provocative comments in an interview to Russian state TV: “Last year, we had the historical reunification of Sevastopol and the Crimea. This year, we present a new view and new powerful stress on the development of the Arctic. Basically, its is all about the same …” and he continued: Russia is now “starting to get more conscious about territory, its interests and borders”. Russia is known as nationalist and expansionist.

Norway’s foreign minister Børge Brende did not leave any doubts that “people on the sanctions list, people that have been central in breaching international law in Ukraine, are not welcome to the mainland or to Svalbard”.

It is, however, unlikely that this will make of an impression on the Russian vice premier. 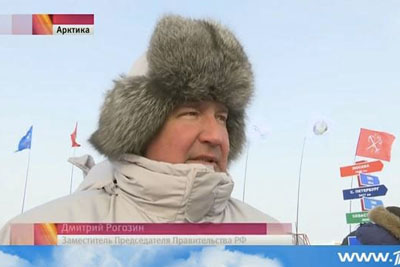