You can discover so much if you just take the time for it. With a small group, we went on a Zodiac trip to explore Recherchefjord in some detail. Starting in Calypsobyen, a little aggregation of old huts where coal occurrences were investigated in the early 20th century, we met some very friendly Polish scientists. Their leader Piotr Zagórski invited us for some tea and coffee and explained their work. Geomorphological fieldwork with some long-term data sets. The glaciers in the area are currently shrinking at a rate of 10 metres per year, which is a lot for glaciers that terminate on land, but are building up ice in their higher reaches. Maybe preparing a surge? Interesting. The active layer is now 1.40 metres thick, in contrast to 1.20 metres as in recent years in average. The summer has been very warm so far in Bellsund. At least, it has brought a lot of colourful flowers to the tundra. 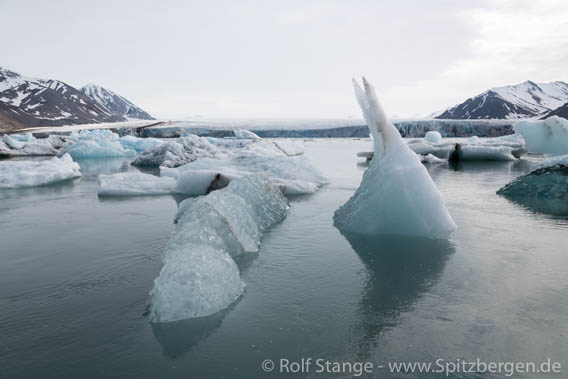 After a relaxed picnic on a moraine hill near Renardbreen (Fox glacier), where colourful tillites are silent witnesses of a more or less global glaciation about 600 million years ago (snowball earth theory), the lagoon at Recherchebreen was the next temptation. The opportunity was good, the tide high, making the passage into the lagoon easy, while icebergs were taking the same channel out at an amazing speed with the current. Once inside, we enjoyed the views of the icebergs and the ice cliff of Recherchebreen silently for a while. The other group, which came hiking to this lagoon a little while later, even saw Belugas there. 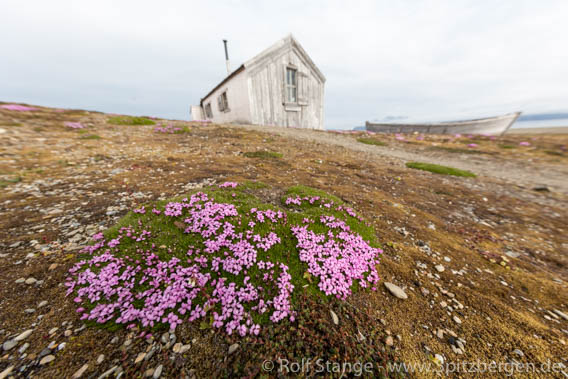 A very wind-battered hut on the eastern shore of Recherchefjord is the only leftover from the attempts of Ernest Mansfield’s Northern Exploration Company to turn the „mountain of iron“ into cash. As it turned out, the mountains is of rock and not iron. Bad for Mansfield and his Northern Exploration company, which lost a lot of money there in 1918-19. Good for the tundra, which is flowering near the hut in the most beautiful colours.