Small ships and boats normally stay between Spitsbergen and Prins Karls Forland, keeping to the better sheltered waters of Forlandsund rather than the exposed west coast of Prins Karls Forland, where the sea can be rougher. So those who can stay inside, and those who stay outside usually do so because they don’t have any other choice. That is the bigger ships with too much draft for the shallow part in the northern Forlandsund.

Considering the good weather and calm seas that we had, we decided, however, to head for the west coast of Prins Karls Forland anyway, taking the rare opportunity of a closer inspection of the outer side of the island. First of all, it was time to catch some sleep when the anchor went down near Aitkenodden last night, before we went ashore there today. Untouched nature, almost nobody is going there. Most ships don’t have time to stop at a place like this, and if you have time, you will usually stay in Forlandsund. Better shelter. But today it was simply an opportunity too good to be missed. Advanced Spitsbergen. Staying away from the trodden path.

There is an old trapper hut at Aitkenodden, near a lake called Nesungen. The hut was built in 1909, now it is just a ruin, but in scenic surroundings, a wide coastal plain with small bays and rocky outcrops along the shoreline. 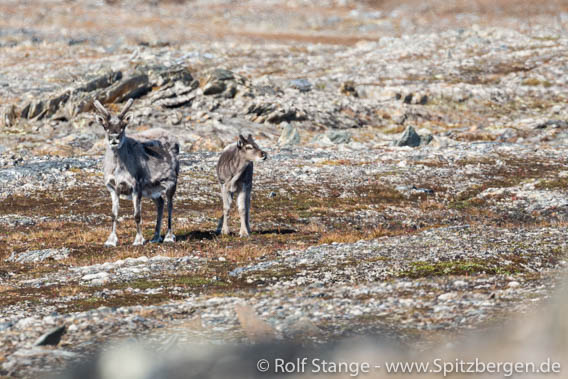 After a bit of sightseeing near the hut, we ventured across the flat tundra away from the coast. Dry moss and lichen tundra everywhere, and flat ridges of exposed shist. A reindeer mother and her calf kept a careful distance while working their way in a circle around us. After a rest, we climbed up Persiskammen which reaches an elevation of 334 metres above the sea. High enough for great views over the tundra and the coastal landscape, both very rich in detail and structure despite of being flat. We took a long rest at a cairn marking the highest point, relaxing in the sun which was shining from the blue arctic sky with an amazing strength, before descending to the eastern side of the island. Meanwhile, Pål had lifted anchor and gone around the southern point of Prins Karls Forland to meet us here in Sandbukta, so we all met there again after a lovely long hike, including the rare opportunities to climb the isolated southern mountain on Prins Karls Forland and crossing the island at the same time. 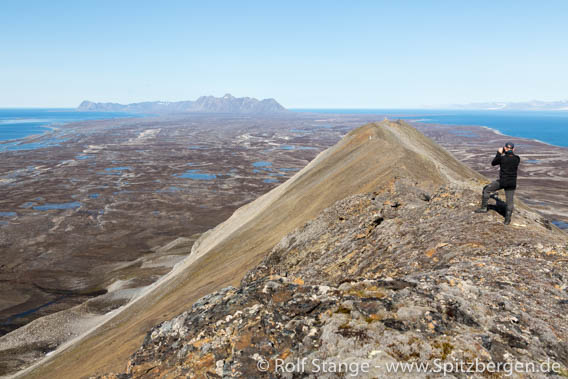 After a quick jump into the water to get fresh again, we continued northwards. We saw about 10 walrusses lazily lying in the sun while passing Poolepynten and enjoyed sunny views of the mountains and glaciers to both sides of Forlandsund while heading towards Kongsfjord.