The main island of Spitsbergen has been circumnavigated by sea kayakers already in 1990. But the second-largest island, Nordaustland, has so far withstood all attempts. Not that there have been a lot, but there were a few, which never really took off due to heavy ice conditions.

Next to difficult ice and weather conditions, it is the long ice cliff of the ice cap Austfonna on the east and south coast of Nordaustland, which makes any attempt to kayak this coast a very demanding venture. The calving glacier front is about 160 kilometres long and does not afford any opportunity to land for a rest or to sit out bad weather.

This summer, two groups have been successful with their attempts to circumnavigate Nordaustland. The Norwegian group “Nordaustland” reached Kinnvika on August 14, where they had started their kayaking expedition. A cruise ship provided safe and comfortable transportation from Longyearbyen to Kinnvika and back, the goal of the expedition was kayaking around Nordaustland and this has been achieved. Congratulations!

But “Nordaustland 2015” were not the first group. Just about one day before, a group of three kayakers, two from New Zealand and one from Norway, had completed their kayak-circumnavigation of Nordaustland successfully. Congratulations also to this group! But they have not yet completed their expedition, as it is their ambitious plan to circumnavigate the whole archipelago, from Longyearbyen to Longyearbyen. But they have done the largest step, Nordaustland, with impressive success.

Both groups met on the way, kept good contact and supported each other with information. “Nordaustland 2015” wrote in their blog “If we reckon that Nordaustlandet is 800 million years old, 24 hours difference is insignificant.” Only a quibbler would challenge this 🙂

Both groups have made an amazing achievement with years of preparation and training. The New Zealand-Norwegian group completed the 160 kilometer ice cliff coast within 40 hours without any major rests. Camping on Isisøyane (earlier called Isispynten) was not possible because of the presence of a number of polar bears. Vibebukta was the next place where putting up a tent was an option. Drift ice and fog slowed the trip down. Fridtjof Nansen, who in 1895 and 1896 made an incredible kajak adventure north of and within Franz Josef Land together with Hjalmar Johansen during his Fram Expedition, would be impressed.

Glacier front on the south coast of Nordaustland behind dense drift ice, July 2015. 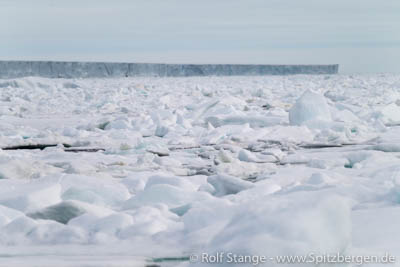