According to weather data of the Norwegian Meteorological Institute, the current summer month August is the warmest of its kind since the beginning of measurements in the 1970s at the airport near Longyearbyen. The normal average temperature in August is 4.8°C. The corresponding value for 2015 will be between 6.6 and 6.8°C (the final value is not yet available).

Longyearbyen has not had summer temperatures on this average level at least since the 1970s. And indeed, parts of August were real summer in Longyearbyen, with temperatures up to around 16°C in cases. People were enjoying the outside tables of the cafés and restaurants and their own homes.

Sometimes, the warm temperatures were more of a local character: while it was more than 16°C in Longyearbyen, it was pleasantly cool (4-5°C) at Kapp Lee on Edgeøya. Altogether, however, weather data from other stations (Ny Ålesund, Isfjord Radio, Barentsburg) indicate a very mild summer also elsewhere in the region.

Locals are more worried about warmer winters than warmer summers. The winter cold is important for the fjord ice. Also shrinking glaciers already make for very obvious changes in the landscape. 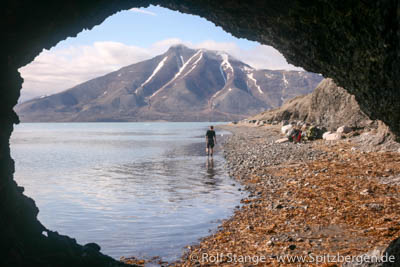