The famous Haudegen-station in the remote Rijpfjord on the north coast of Nordaustland was a German military weather station from the Second World War. The soldiers who manned the Haudegen station were not picked up before September 1945 and they were the last unit of the Wehrmacht (German military during the war) which surrendered officially (and very happily) on this occasion. Rumors that they had simply been forgotten are wrong: they had constantly been in touch with Norway after the end of the war, both about their pickup and for sending weather data to the meteorological network.

Since then, the building of the Haudegen-station has been decaying. It is the only war weather station in the arctic that still has a standing building, but the so-called “hard paper hut” has suffered strongly from 70 years of arctic weather. Meltwater seeping through the roof was a menace already in spring 1945, and the moisture has not done the building any good since. As a reaction, access to the hut and its nearest surroundings was closed in 2010. Per Kyrre Reimert, then archeologist at the Sysselmannen, said that due to a lack of resources to repair the house, closing it was the only alternative.

In August 2015, major repair work was done on Haudegen station for the first time since 1945. A team of craftsmen from the Sysselmannen was there to start the project. A small temporary hut was established for accommodation. The Haudegen station has got a new roof which is supposed to protect the building from moisture. Further work remains to be done, but no more details are known at the time of writing.

The Haudegen-station in August 2015 with a new roof. 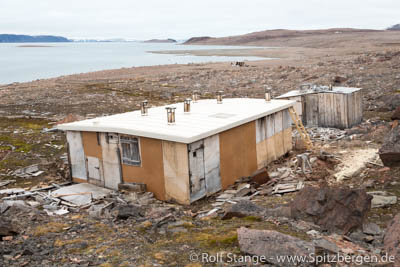