As mentioned before, we were curious what the day would bring. Essentially, we were prepared for a lot of wind. Which we got. And a lot more.

We had done the whole stretch from southern Forlandsund to the northwest during the night under sails, nicely with the squares, calm and no strong listing, very pleasant. 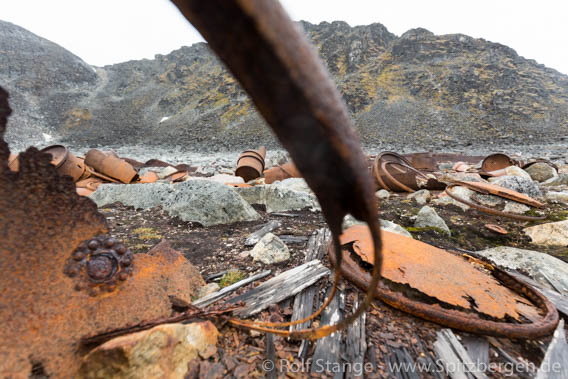 Considering the strong southerly wind, Virgohamna was a natural choice. Starting with telling the relevant stories there in some details, otherwise all you see there is a pile of rubbish. With the stories of the expeditions of Andrée and Wellman on your mind, it is suddenly a Mekka of polar history. Also some harbour seals were present.

Opposite in Smeerenburg, a group of walrusses were hauled out on the beach, but the wind did not leave a chance for a landing. We had to make do with a reasonably close passage by ship, which turned out to be fine. 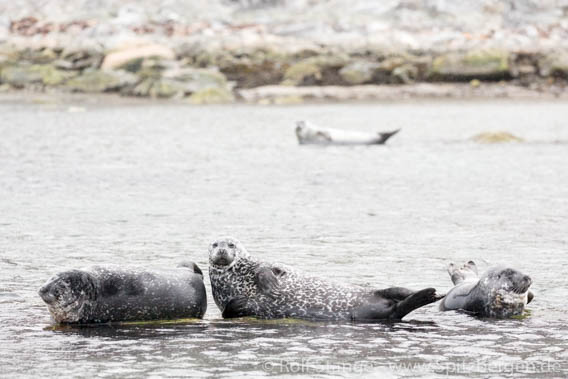 Then, we continued into Fuglefjord. Grand panorama, mountains, glaciers. Spitsbergen has got its name for a reason, this became clear again here.

Svitjodbreen has retreated strongly in recent years. A rock that came out under the glacier some years ago is now an island. First mate Moritz was so kind to put me ashore for a moment to take a 360 degree panorama photo – maybe I am the first one to have set foot on the island? You should never say or even think that you are the first one to have done something in Spitsbergen. There has always been someone who was earlier out, it won’t be any different here. But the possibility as such is a nice thought. 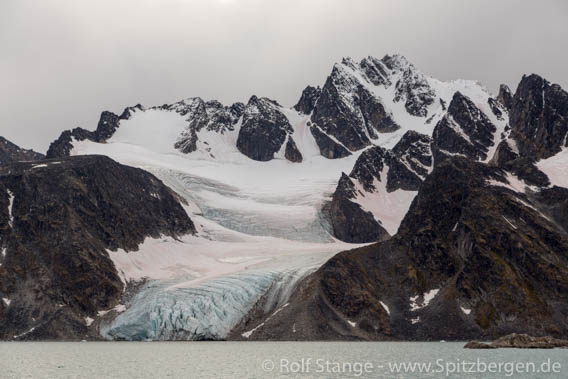 But that was not the point. Taking the 360 degree panorama was the thing for me. To the delight of everybody on board, as they had me for scale on the island in front of the glacier. Meanwhile, Moritz was biding his time in the Zodiac by reading my Spitsbergen book! That is hard to see in the panorama, but I loved the idea. The result can soon be seen on this website. I am pretty sure it is the first 360 degree panorama taken there. Not a bad thing. Click here to see the result.

There was more to come today. More about that later.