Polar bear mother with 3 cubs has lost 2 of them

In May 2015, a polar bear family with 3 cubs has been observed in Tempelfjord and Billefjord (click here for May article on this website).

Triplets are very rare, twins are normal. The female in question, did, however, not have triplets for the first time: in april 2011, she had already been caught, sedated and examined by scientists on the east coast of Spitsbergen, when she had triplets. Back then, only one of three cubs survived in the end.

In spring 2015, the female was caught and sedated again. At that time, her 3 cubs were so small that they were not sedated, but they were present during the examination of their mother. According to data from the satellite transmitter on the collar that was attached to the female on the occasion, the family then started a remarkable journey northwards to spend the summer north of Nordaustland. Later, they returned south again, crossing Nordaustland, Hinlopen Strait and northeastern Spitsbergen to return to Tempelfjord, where the female was recently seen. Only one cub was still with her, the other two are apparently lost. It is not known when and how they died, but it is common that mother polar bears lose part of their offspring during the first summer or later. Access to food can be difficult, and competition between the cubs can be strong then. 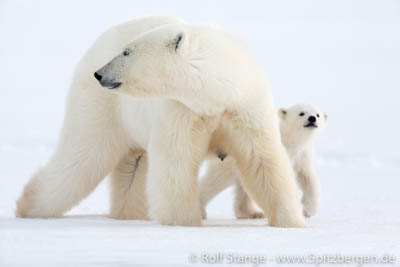