This is the update on yesterday’s article (Male polar bear injured by scientific collar). A mixed US-American/Canadian team is out trying to find the bear, which is known as “Andy”. The following update from earlier today (Oct. 28) is from Polar Bears International, with additional comments from Morten Jørgensen:

“… basically … there’s no news: The bear hasn’t been re-sighted since Oct. 13th and a combined US/Canadian team is assessing how to proceed. To further complicate matters, the sea ice has begun to freeze, the bears are dispersing from Kaktovik, and the collar is no longer broadcasting (if it were on the air, it would have been removed earlier). This is a logistically complex problem that they’re doing their best to resolve…”

“This is sad. And it raises more questions than it answers.

Apart from that, now we know a little (very little) more.

1. We know that the collar is not sending a signal and has not done so for a while – meaning that the bear is wearing it for absolutely nothing.

2. And we know that unless the situation changes, “Andy” is off somewhere in the beginning of the polar night on his own, possibly to slowly die from wounds and infections inflicted by his “instrument”.

This case leaves many, many questions still. Once those responsible are back from their excursion, we expect answers.”

So far Morten’s comments. There will be updates on this pages as soon as there are any news.

The polar bear “Andy” in Alaska, equipped with and injured by a scientific collar with satellite transmitter, is now out on the sea ice. His chances to be found and rescued are getting smaller. 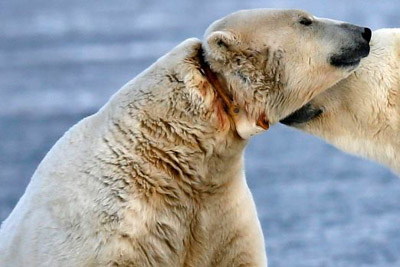