Home → * News and Stories → Oil and gas from the Arctic? Test drillings northeast of Svalbard

Oil and gas from the Arctic? Test drillings northeast of Svalbard

Posted on 1. November 2015 by Jan Leiendecker

During September and October the Norwegian Petroleum Directorate (Oljedirektoratet) arranged seven test drillings northeast of Svalbard. The financing for these drillings was approved by the Norwegian Parliament (Storting).

Such activities are highly contentious, particularly because Norway clearly defined that there should be no drilling for oil or gas beyond the sea ice edge, the line of maximum sea ice expansion in spring. This time the drillings were done along Svalbard´s east side, up to the island Kvitøya and were going down to 200 meters below the seafloor. This area lies outside the protection zone of the archipelago but it lies far north of the sea ice edge. In accordance with this fact, the Petroleum Directorate declared that the drillings had nothing to do with the oil and gas industry. They were just surveys of the geological structure in this area.

The dissenting opposition parties in the parliament, the social liberal Venstre and the green MDG, condemned this operation sharply. If so far in the north, oil and gas extraction is not intended anyway and is not even allowed, at least so far, this operation was simply a waste of money, a speaker of the Venstre said.

In recent years Norway pushed forward the exploration of oil and gas fields in the North Atlantic – off Lofoten and Vesterålen – and in the Barents Sea. But not even there extraction is approved everywhere, and it is still controversial. It is rejected among others by parts of the local population, environmental associations and by the fishing industry. However, when large oil and gas fields are discovered and explored continuously, as recently happened in the Barents Sea northwest of Hammerfest, this will obviously create facts, regardless of the current legal situation. Political decisions will be influenced by the prospect of economical profit. In 2012 the former foreign minister Espen Barth Eide of the social democratic Arbeiderpartiet already made clear that economic considerations are prioritized when it comes to the Norwegian oil and gas resources. Environmental politics can be adjusted, if necessary (see also Spitsbergen-Svalbard.com news Norwegian foreign minister about arctic oil and gas from November 2012).

Northeastern Svalbard: a place for polar bears, ice and wilderness, not for oil and gas. 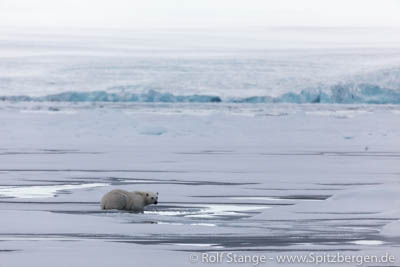