A polar bear was shot on Saturday at Verlegenhuken, on the north coast of Spitsbergen.

A group of four ski tourists from Finnland, on Spitsbergen for a 3 week trip, was on Verlegenhuken when the men were approached by the polar bear. Initially, they could scare it away with a signal pistol, but then the bear approached again and a rifle shot was fired from a distance of 35 metres. The polar bear was wounded and went away. The group alarmed the Sysselmannen. Officials arriving by helicopter managed to find the bear in a snow cave in a cliff and shot it.

The body of the polar bear was taken to Longyearbyen for a post mortem. Until now, it is only known that it was a male bear weighing 116 kg. The weight suggests that it was a young animal, possibly malnutritioned in addition. But this is not confirmed information.

The case will routinely be a matter of police investigation to establish wether or not it was a case of self defense. In case of carelessness, the law opens for fines or even imprisonment.

The last time a polar bear was shot was in March 2015 in Tempelfjord.

The polar bear at Verlegenhuken, which was shot on Saturday (photo © Irene Sætermoen / Sysselmannen på Svalbard). 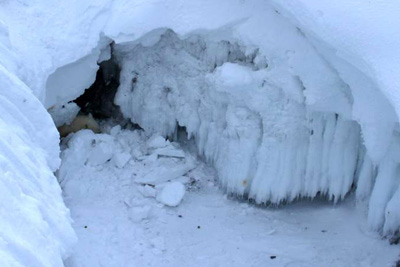