The series of sad news about deadly encounters between polar bears and humans in Spitsbergen does not stop: on August 09, a polar bear was shot in the bay Selvågen on Prins Karls Forland on Spitsbergen’s west coast.

Since August 01, 6 Russian scientists were based in a camp in Selvågen. As far as known, the polar bear was for the first time in the vicinity of the camp on August 09. As she was in a distance of 130 metres (yes: one hundred and thirty metres!), one of the scientists fired a warning shot from a flare gun. Immediately thereafter, another fired two sharp shots from a rifle. At least one of these shots must have hit the polar bear on a distance of 130 m.

The wounded animal went into the water where she died soon. The Russians towed her to the shore with a rope.

This happened around 10 p.m. The Sysselmannen was informed about 12 hours later. The law requires to inform the authorities as soon as possible in such a case.

Once local investigations are completed, the case will be forwarded the the federal prosecutor in Troms og Finnmark (north Norway).

Further details have not yet been published, but the distance of 130 m and the short time between the warning shot and the sharp shots may indicate that no serious attempt was made to scare the bear away and save her life.

The bay Selvågen a few days before the polar bear was shot on August 09. 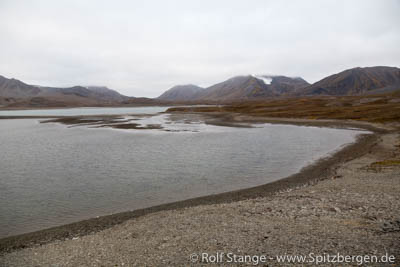